Some difference between servo motor and closed-loop stepper motors?

Servo and stepper motors have similar construction and share the same fundamental operating principle. Both motor types incorporate a rotor with permanent magnets and a stator with coiled windings … and both are operated by energizing or applying a dc voltage to the stator windings. That then causes the rotor to move. However, this is where the similarities between servo and stepper motors end.

Image credit: QuickSilver Controls, Inc.
Servo drives, on the other hand, produce sine waves with variable frequency and amplitude — allowing them to control both speed and torque.

Traditional stepper motors move when they receive a command to advance a certain number of pulses, which correlate to a distance. Steppers are considered open-loop systems because they lack a feedback mechanism to verify that the target position has been reached. Servo motors also move on receipt of a command signal from their controller. In contrast to the open-loop operation of stepper motor systems, servo motors are closed-loop systems, with built-in encoders that continuously communicate back to the controller, which makes any needed adjustments to ensure the target position is reached.
In stepper motor systems, if the available motor torque is not adequate to overcome the load, the motor will stall or skip over one or more pulses, creating a difference between the desired position and the actual position reached. To avoid this, stepper motors are often oversized to ensure there’s a large margin between the worst-case load torque and the motor’s available torque. But there is an alternative to oversizing the motor. By adding an encoder and operating in closed-loop mode, stepper motor systems can achieve position monitoring and control much like servo motors.

The most straightforward way to operate a stepper motor in closed-loop mode is to compare the theoretical position which should have been reached based on the number of steps, with the actual position reached based on the encoder feedback. If there is a difference between the target and actual positions, the controller initiates a correction move.
While the above method is reactive, correcting the motor’s position after completion of the move, a closed-loop stepper can also continuously monitor the difference between the position steps and the encoder feedback (which is typically mounted on the load). With continuous feedback, compensation can be done in real-time, by increasing the pulse rate, temporarily increasing the current, or adjusting the step angle.
A third method for operating stepper motors in closed-loop mode employs sinusoidal commutation. If the rotor and stator magnetic fields are not properly aligned, the encoder adjusts the motor current to exactly match the torque needed to move or hold the load. Because the feedback is used to control torque by manipulating the motor current, this mode is sometimes referred to as servo control. In servo control mode, the stepper motor is essentially acting like a high-pole count servo motor, but without the noise and resonance that traditional stepper motors exhibit, providing a much smoother movement and more precise control. And with current that is dynamic, rather than constant as in a traditional stepper, the problem of motor heating is largely avoided.
Closed-loop stepper motors eliminate many of the disadvantages of traditional open-loop stepper systems, making them similar in performance to servo motors. But servo motors outperform even closed-loop steppers in applications that require high speed, high torque at high speed, or the ability to handle changing loads.
http://www.stepperchina.com/2019/11/22/do-you-really-whichi-is-fit-for-you-nema-17-or-nema23/

How to Configure Motion Controller & Test a Stepping Motor

How do I configure my NI 73xx motion controller to control my stepper motor?

You can follow these steps to configure your motion controller and test a step motor:

CNC controllers for the DIY machine with Stepper Motor

Now we know the stepper motors required for our project we can match them to a suitable CNC controller. The controller converts the g-code we’ve created and sends step pulses to the stepper motors. It also takes input signals from the machine such as limit switches and E-stops.

So there are 3 things we need to know:-

CNC routers can use 3 or 4 axis controllers. There is only 3 planes of movement X, Y and Z but some designs use two stepper motors on one axis. My OX CNC router uses two NEMA 23 on the Y-Axis as its a gantry type router. Some move the table bed for the Y-Axis on sliders and only need 1 motor for the Y-Axis. Like a 3d printer bed
Foam cutters need 4 axes to allow the hot wire to move in any direction on 4 planes usually X,Y,U and V.
at November 15, 2019 No comments: 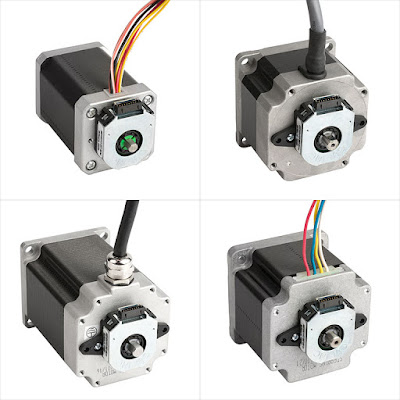 In response to each individual control pulse and direction signal, the drive applies power to the motor windings to cause the rotor to take a step forward, a step in reverse, or hold in position. For example, in a 1.8 degree two phase step motor: When both phases are energized with DC current, the motor will stop rotating and hold in position. The maximum torque the motor can hold in place with rated DC current, is the rated holding torque. If the current in one phase is reversed, the motor will move 1 step (1.8 degrees) in a known direction. 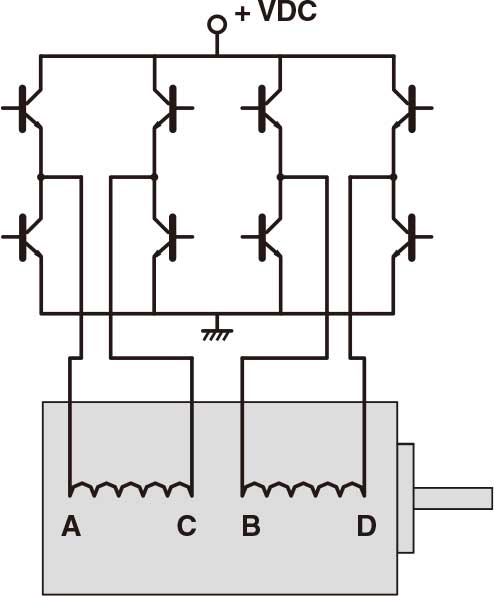 If the current in the other phase had been reversed, the motor would move 1 step (1.8 degrees) in the other direction. As current is reversed in each phase in sequence, the motor continues to step in the desired direction. These steps are very accurate. For a 1.8 degree step motor, there are exactly 200 steps in one revolution. 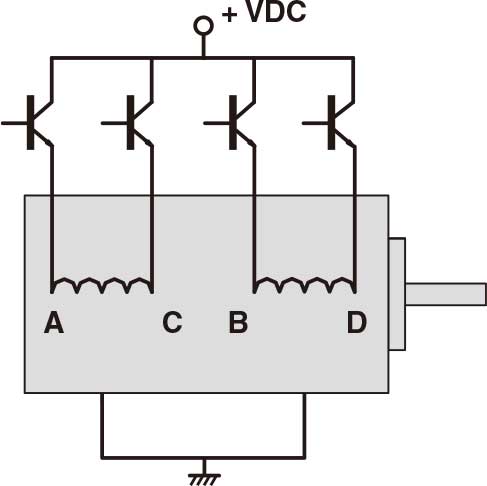 Two phase stepping motors (17hs13-0404s, 17hs08-1004s, 23HS22-2804S )are furnished with two types of windings: bipolar or unipolar. In a bipolar motor there is one winding on each phase. The motor moves in steps as the current in each winding is reversed. This requires a drive with eight electronic switches. In a unipolar motor there are two windings on each phase. The two windings on each phase are connected in opposite directions. Phase current is reversed by turning on alternate windings on the same phase. This requires a drive with only four electronic switches. Bipolar operation typically provides 40% more holding torque than unipolar, because 100% of the winding is energized in the bipolar arrangement.

Complete code with working video control Nema 17 with Arduino is given at the end of this tutorial, here we are explaining the complete program to understand the working of the project.

After that define the no of steps for the NEMA 17.  As we calculated, the no. of steps per revolution for NEMA 17 is 200.

Next set the speed for stepper motor using stepper.setSpeed function. Maximum motor speed for NEMA 17 is 4688 RPM but if we run it faster than 1000 RPM torque falls of quickly.

Now connect the Arduino with your laptop and upload the code into your Arduino UNO board using Arduino IDE, select the Board and port no and then click on the upload button.
Now you can control the direction of Nema17 stepper motor using the potentiometer. The complete working of the project is shown in the video below. If you have any doubts regarding this project, post them in the comment section below.
Code
#include <Stepper.h>
#define STEPS 200
// Define stepper motor connections and motor interface type. Motor interface type must be set to 1 when using a driver
Stepper stepper(STEPS, 2, 3); // Pin 2 connected to DIRECTION & Pin 3 connected to STEP Pin of Driver
#define motorInterfaceType 1