Some difference between DC motor and Stepper motor

DC (high speed high torque bldc motor) Motors are two wire (power & ground), continuous rotation motors.
-The speed of DC motors is controlled using pulse width modulation (PWM), a technique of rapidly pulsing the power on and off. The percentage of time spent cycling the on/off ratio determines the speed of the motor, e.g. if the power is cycled at 50% (half on, half off), then the motor will spin at half the speed of 100% (fully on). Each pulse is so rapid that the motor appears to be continuously spinning with no stuttering. 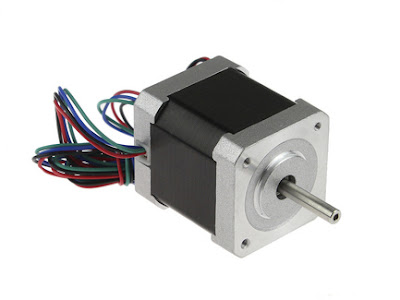 Servo Motor:
-Servo motors are generally an assembly of four things: a DC motor, a gearing set, a control circuit and a position-sensor (usually a potentiometer).
-The position of servo motors can be controlled more precisely than those of standard DC motors, and they usually have three wires (power, ground &). Power to servo motors is constantly applied, with the servo control circuit regulating the draw to drive the motor.
-PWM is used for the control signal of servo motors. However, unlike DC motors it’s the duration of the positive pulse that determines the position, rather than speed, of the servo shaft.